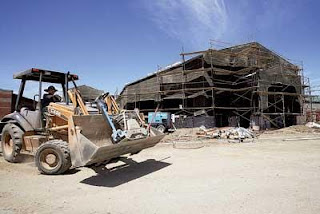 Construction continues at the site of Dixon's new high school on Friday. Some facilities won't be completed until September. (Steve McKay/The Reporter)

With an Aug. 15 deadline approaching, the new Dixon High School is close to completion, but with quite a few last minute touches still to go.

"It's pretty scary, if you look around, to think we'll be ready to open in a few weeks," said Ed Eusebio, senior director of school facilities for the Dixon Unified School District. "It's amazing what can happen in one day."

Although the high school grounds behind Hall Park and the May Fair grounds are still dusty because of construction, all the classrooms are finished and waiting for furniture, according to Eusebio.

"We're getting brand new furniture for everything," he said. "Very little will be moved from the old campus."

A grand opening at 9:30 a.m. Aug. 11 will give the community a chance to tour the state-of-the-art facility.

"I'm very excited for the community to see the end-product," said Shana Levine, vice president of the District's Board of Education. "The entire public is welcome at the opening ceremony. It's a beautiful facility that will last."

Each classroom will have a handful of computers and a DVD projector for the 1,200 students starting school Aug. 15. Each classroom has censored lighting and great big windows as well. A kiln also is being built on campus for the ceramics classes.

"The kids have no idea of what kind of opportunities they're going to experience," Levine said.

Some things, however, won't be completed until September.

"In construction we always like to be ahead and not behind," said Eusebio, adding that the four months of rain in 2006 really put the project behind.

"We tried to recover some of the time. The most difficult parts are pretty much complete."

Construction of the cafeteria, Eusebio said, is really coming down to the wire, but he said not to worry.

"Not having the cafeteria ready won't prevent us from opening on time," he said. "We'll just have to make the appropriate arraignments."

Levine isn't discouraged either by some of the late openings on campus.

Levine explained that there wouldn't have been any performances in the theater in the first few weeks of school anyway and the athletic field, even if it was finished wouldn't be used until the spring.

The new high school cost $75 million and has the capacity for 2,200 students, a number the district won't see for quite a while.

"There is a lot of space for the kids to grow," Eusebio added.

The school campus sits on 80 acres donated to the district, 50 acres for buildings and athletic fields and 30 acres for the school's farm. 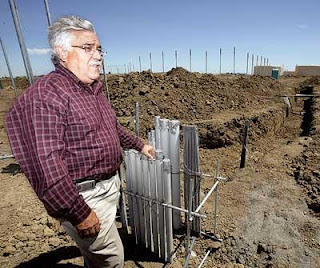 Dixon Unified School District Facilities Director Ed Eusebio on Friday looks over construction near what will be athletic fields at Dixon's new high school off Country Faire Drive in Dixon. Eusebio has played a leading role in the project. (Steve McKay/The Reporter)

Melissa Murphy can be reached at dixon@thereporter.com.
Posted by Solano EDC at 8:34 AM